A Middle of the Road Solution 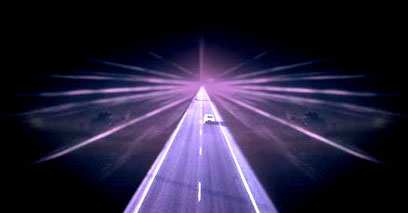 “If you are as seriously alcoholic as we were, we believe there is no middle-of-the-road solution.” —Alcoholics Anonymous: There is a Solution, page 25

At the time that A.A. came into being, there were not a lot of options for those who suffered from alcoholism. This was due in large part to the overall mindset people had about “problem drinkers”. Most people considered drunks to be moral misfits. In fact, the word ALCOHOLISM was not the common, household word it is today. Additionally, the medical field was not as advanced regarding the cause and effect of alcohol upon certain individuals as it is today.
Here in the 21st century, the treatment of alcoholism, drug addiction, and other compulsive / obsessive behaviors, is big business; resulting in a plethora of options for those who suffer. But such was not the case when A.A. was in its infancy. Most alcoholics were what we call today “low-bottom” cases; men and women whose alcoholism had gotten to the point that they were put away in “asylums” and if that was not an option, they died in their sickness. 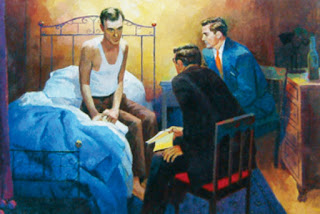 When we look back at the early history of A.A. we see that those Dr. Bob and Bill worked with were what we call today “wet drunks.” And this was pretty much the case for about the first 30 or so years of A.A. People would come to A.A. in sad shape; many of them reeking of booze and shaking like a leaf on a tree — something we don’t see very often in the rooms today.
Because the majority of drunks were in such an advanced state, they were more willing to consider and accept as true the ABC’s of this program. Since the “old-timer” had been to the gates of hell himself, he was able to share his experience, strength, and hope in a manner that was akin to giving a cup of water to a man who was dying of thirst — and the “newcomer” received it as such. That is why we read again and again throughout the first 164 pages and in the personal stories in the back of the first and second edition of the Big Book, how and why so many seemingly hopeless drunks were able to “take up their beds and walk again” (as it says on page 19).
Today we do not see a whole lot of “wet drunks” or “low-bottom” cases in the rooms of A.A. That is due in part to our modern awareness of alcoholism and the fact that most newcomers to A.A. have already been through some sort of drying-out period; be it self-imposed or otherwise. This has had quite an effect upon the efficacy of A.A. as a whole. Today when we say to the newcomer that they are beyond human aid and need to find the “One who has all power” (“that One is God”), they think we are a bunch of religious nuts that have traded in their bottles for Bibles — and in all reality, they are not all that far off the mark. In the rooms of A.A., the “Big Book” is our Bible. In fact, our legal system has even gone so far as to proclaim that no one can be “court ordered” to attend A.A. meetings because it is a religious organization.

As a result, the God message has been all but done away with in the rooms of A.A. Today GOD has become an acronym; such as a “group of drunks” or a “good orderly direction”. Today it is more about attending meetings and repeating cute phrases such as “meeting makers make it”. In all truth – the only thing meeting makers make is meetings! While recovery-oriented meetings are important part of getting sober, we simply do no recover by the number of meetings we make, but by the steps we take! Steps 1 through 3 require an honest appraisal of our situation; those are the ABCs of the program; the bottom-line being “that God could and would if he were sought.” (See “Alcoholics Anonymous” page 60)
The question is – which concept of God works best? Is it the warm and fuzzy concept that is most often promoted “in the rooms” today, or is it the concept that not only relieved the founders and pioneers of the A.A. program of their obsession to drink, but that also (as it says on page 25) “revolutionized our whole attitude toward life, toward our fellows and toward God’s universe”?
That is a decision each of us must make on our own. Choose wisely. “There is no middle-of-the-road solution.” “Half measures availed us nothing.” “We thought we could find an easier, softer way, but we could not.” That is why “we beg of you to be fearless and thorough from the very start. Some of us have tried to hold on to our old ideas and the result was nil until we let go absolutely.”


The following video presents how the message of the cross and the idea of first century Christianity shaped the formation of Alcoholics Anonymous. The connection between Keswick, Jessie Penn-Lewis, The Oxford Group, and the founding of AA

As addicts and alcoholics, we tend to blame our actions on the substances we ingested, because - under the influence - we did and said things we normally would not do and/or say.
Post a Comment
VIEW DISCUSSION »

In Need of a Friend

Everyone needs a friend that they can relate to and with. Those of us in recovery need an extra-special  kind of friend.
Post a Comment
VIEW DISCUSSION »