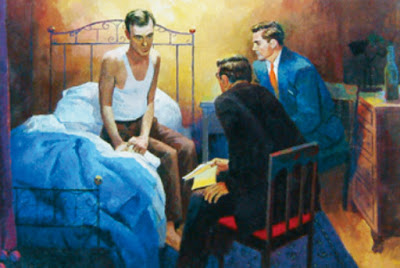 “For me, addiction never dies; it sleeps.
It's eyes pop wide open when it hears me opening a bag of self-will.” --Anonymous

The "suggested program of recovery" as outlined in the book, 'Alcoholics Anonymous' (pg. 59) is a program of 'Faith in Action' (pgs. 76,88,93). That is to say, in order to recover from the "spiritual malady" (pg. 64), one must understand that they need to drastically change the way they have been living AND that they need to apply the principles of the program with the same vigor the co-founders and pioneers of Alcoholics Anonymous did. By taking such action, one can obtain the skills necessary to overcome their current predicament and ultimately become "happy, joyous and free" (pg. 133).

Unfortunately, the general manner in which the program of recovery is practiced and passed on today in the 21st Century, is but a faint shadow of the original program and tenets, as recorded in the 'basic text' of the book, Alcoholics Anonymous.

You see, in the original manuscript, faith in God was paramount to recovery. Hence, the reason for the content in Chapter 4, 'We Agnostics'. In this chapter we find statements such as…

If, when you honestly want to, you find you cannot quit entirely, or if when drinking, you have little control over the amount you take, you are probably alcoholic. If that be the case, you may be suffering from an illness which only a spiritual experience will conquer.
Lack of power, that was our dilemma. We had to find a power by which we could live, and it had to be a Power greater than ourselves. Obviously. But where and how were we to find this Power? Well, that's exactly what this book is about. Its main object is to enable you to find a Power greater than yourself which will solve your problem. That means we have written a book which we believe to be spiritual as well as moral. And it means, of course, that we are going to talk about God.
Besides a seeming inability to accept much on faith, we often found ourselves handicapped by obstinacy, sensitiveness, and unreasoning prejudice. Many of us have been so touchy that even casual reference to spiritual things made us bristle with antagonism. This sort of thinking had to be abandoned. When we saw others solve their problems by a simple reliance upon the Spirit of the Universe, we had to stop doubting the power of God. Our ideas did not work. But the God idea did.
When we became alcoholics, crushed by a self-imposed crisis we could not postpone or evade, we had to fearlessly face the proposition that either God is everything or else He is nothing. God either is, or He isn't. What was our choice to be?

At the close of this chapter, the story is told of the experience that one of the pioneers had regarding his issue with placing his faith in God…

In this book you will read the experience of a man who thought he was an atheist. His story is so interesting that some of it should be told now. His change of heart was dramatic, convincing, and moving.
Our friend was a minister's son. He attended church school, where he became rebellious at what he thought an overdose of religious education. For years thereafter, he was dogged by trouble and frustration. Business failure, insanity, fatal illness, suicide - these calamities in his immediate family embittered and depressed him. Post-war disillusionment, ever more serious alcoholism, impending mental and physical collapse, brought him to the point of self-destruction.
One night, when confined in a hospital, he was approached by an alcoholic who had known a spiritual experience. Our friend's gorge rose as he bitterly cried out: "If there is a God, He certainly hasn't done anything for me!" But later, alone in his room, he asked himself this question: "Is it possible that all the religious people I have known are wrong?" While pondering the answer he felt as though he lived in hell. Then, like a thunderbolt, a great thought came. It crowded out all else: "Who are you to say there is no God?"
This man recounts that he tumbled out of bed to his knees. In a few seconds he was overwhelmed by a conviction of the Presence of God. It poured over and through him with the certainty and majesty of a great tide at flood. The barriers he had built through the years were swept away. He stood in the Presence of Infinite Power and Love. He had stepped from bridge to shore. For the first time, he lived in conscious companionship with his Creator.
Thus, was our friend's cornerstone fixed in place. No later vicissitude has shaken it. His alcoholic problem was taken away. That very night, years ago, it disappeared. Save for a few brief moments of temptation the thought of drink has never returned; and at such times a great revulsion has risen up in him. Seemingly he could not drink even if he would. God had restored his sanity.
What is this but a miracle of healing? Yet its elements are simple. Circumstances made him willing to believe. He humbly offered himself to his Maker - then he knew.
Even so has God restored us all to our right minds. To this man, the revelation was sudden. Some of us grow into it more slowly. But He has come to all who have honestly sought Him. When we drew near to Him He disclosed Himself to us!

So, we see that the co-founders and pioneers of Alcoholics Anonymous had no doubt as to their need of God, and that He did for them what they could not do for themselves.

The great fact is just this, and nothing less: That we have had deep and effective spiritual experiences which have revolutionized our whole attitude toward life, toward our fellows and toward God's universe. The central fact of our lives today is the absolute certainty that our Creator has entered into our hearts and lives in a way which is indeed miraculous. He has commenced to accomplish those things for us which we could never do by ourselves.
If you are as seriously alcoholic as we were, we believe there is no middle-of-the-road solution. We were in a position where life was becoming impossible, and if we had passed into the region from which there is no return through human aid, we had but two alternatives: One was to go on to the bitter end, blotting out the consciousness of our intolerable situation as best we could; and the other, to accept spiritual help. This we did because we honestly wanted to and were willing to make the effort.

In Chapter 5, 'How It Works', the co-founders and pioneers delineate how they overcame their dilemma, their "seemingly hopeless state of mind and body" (from the Forward to the First Edition).

Rarely have we seen a person fail who has thoroughly followed our path. Those who do not recover are people who cannot or will not completely give themselves to this simple program, usually men and women who are constitutionally incapable of being honest with themselves. There are such unfortunates. They are not at fault; they seem to have been born that way. They are naturally incapable of grasping and developing a manner of living which demands rigorous honesty. Their chances are less than average. There are those, too, who suffer from grave emotional and mental disorders, but many of them do recover if they have the capacity to be honest.
Our stories disclose in a general way what we used to be like, what happened, and what we are like now. If you have decided you want what we have and are willing to go to any length to get it-then you are ready to take certain steps.
At some of these we balked. We thought we could find an easier, softer way. But we could not. With all the earnestness at our command, we beg of you to be fearless and thorough from the very start. Some of us have tried to hold on to our old ideas and the result was nil until we let go absolutely.
Remember that we deal with alcohol-cunning, baffling, powerful! Without help it is too much for us. But there is One who has all power-that One is God. May you find Him now!
Half measures availed us nothing. We stood at the turning point. We asked His protection and care with complete abandon.

Here are the steps we took, which are suggested as a program of recovery:
(1) We admitted we were powerless over alcohol-that our lives had become unmanageable.
(2) Came to believe that a Power greater than ourselves could restore us to sanity.
(3) Made a decision to turn our will and our lives over to the care of God as we understood Him.
(4) Made a searching and fearless moral inventory of ourselves.
(5) Admitted to God, to ourselves, and to another human being the exact nature of our wrongs.
(6) Were entirely ready to have God remove all these defects of character.
(7) Humbly asked Him to remove our shortcomings.
(8) Made a list of all persons we had harmed and became willing to make amends to them all.
(9) Made direct amends to such people wherever possible, except when to do so would injure them or others.
(10) Continued to take personal inventory and when we were wrong promptly admitted it.
(11) Sought through prayer and meditation to improve our conscious contact with God as we understood Him, praying only for knowledge of His will for us and the power to carry that out.
(12) Having had a spiritual awakening as the result of these steps, we tried to carry this message to alcoholics, and to practice these principles in all our affairs.
Many of us exclaimed, "What an order! I can't go through with it." Do not be discouraged. No one among us has been able to maintain anything like perfect adherence to these principles. We are not saints. The point is, that we are willing to grow along spiritual lines. The principles we have set down are guides to progress. We claim spiritual progress rather than spiritual perfection.
Our description of the alcoholic, the chapter to the agnostic, and our personal adventures before and after make clear three pertinent ideas:

(a) That we were alcoholic and could not manage our own lives.
(b) That probably no human power could have relieved our alcoholism.
(c) That God could and would if He were sought.

In the original manuscript was the following caveat;

If you are not convinced on these vital issues, you ought to re-read the book to this point or else throw it away!

How sad that the decision was made to remove such an urgent admonishment.


EDITOR’S NOTE: All text cited is from the 'basic text' of ‘Alcoholics Anonymous’, first edition, which is in the public domain.