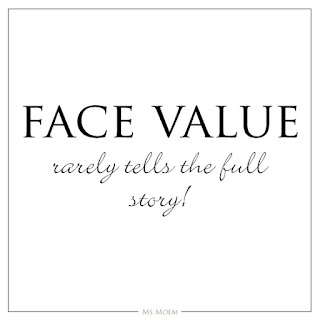 Many people take much of what they see and hear at face value.


What do I mean by that? Well, generally it means

“To accept something because of the way it first looks or seems, without thinking about what else it could mean. These results should not be taken at face value - careful analysis is required to assess their full implications. (often negative).
SOURCE: The Free Dictionary

To better illustrate what I mean, consider the following;


In 2007, when the 110th Congress began, the first bill introduced on the floor of the U.S. Senate (SB1), was a bill to provide greater transparency in the legislative process. Many organizations that “lobby the hill” in Washington sent letters to their members, encouraging them to take action against the passage of this bill, particularly Section 200, under the guise that it would limit freedom of speech in America.


Taken at face value, that sounds like a worthy cause to protest. HOWEVER, if one takes the time to research the particulars of SB1, Section 200, it quickly becomes clear that such is not the case. Rather, as part of an ethics reform bill, the measure, and in particular, Section 200, are aimed at making government more transparent and calls for lobbyists and their respective organizations, to provide public record of where their money comes from. In other words, it makes them accountable. It allows a U.S. citizen the freedom and ability to see who is supporting a particular lobbyist organization, such as the American Family Organization, among others. People would be able to see who the biggest contributors are and how much is being contributed by them. The bill calls for transparency and responsibility. The bill does not limit freedom of speech as many organizations would have their members believe.


When it comes to the Bible and the things of God, many people who are against religion in general and against Christianity in particular, present arguments that, at face value sound reasonable. One example would be that the Bible is unreliable because it contradicts itself. They might give Matthew 27:1-10 and Acts 1:16-19 as an example, wherein one text has Judas giving back the thirty pieces of silver and then hanging himself. The other text says that he bought a field and therein fell headfirst, and in the process, somehow split his gut open and died in the middle of the field. On the surface, taken at face value, those two texts do seem contradictory. However, when one digs deeper to learn more about this, and other seemingly contradictory text, one comes to understand that there is no real contradiction.


Even during Jesus’ ministry many of his followers took what he said at face value and ceased to follow him as a result (See John 6:22-65).


Whenever we take things at face value, we run the risk of being misinformed and mislead. According to Scripture, a person will come forth claiming to be the Son of God and perform many signs and wonders, deceiving many people, because they will take what he does and says at face value. That is why it is imperative that those who truly desire to know the truth must not take anything at face value. They must be like the Bereans when the apostle Paul came and preached in their city (See Acts 17:10-12).


I strongly encourage everyone, but most especially those who seek to follow in the footsteps of Christ, to not take anything at face value and to refrain from repeating things you have heard or read, before you have done your homework and are sure of the facts. To repeat a falsehood or a 'distorted truth' is the same as if it began with you. It is the same as gossip. It is the same as slander. It is morally wrong and often leads to further unrighteousness (the more you do it the easier it is to do, and the less harmful it seems to do it).


Followers of Christ are called to set themselves apart from the ways of the world – from that which they know to be wrong and unholy. Christians are to be ambassadors of Christ, spreading the truth, being salt and light to the lost. If we do not stand out from the world, then how will the world know us? 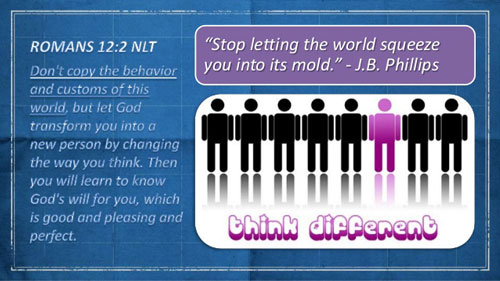