Such A Great Salvation 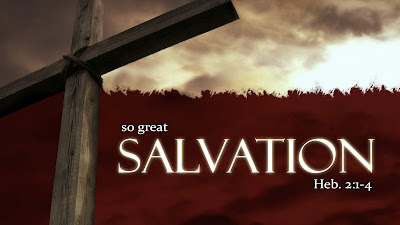 Have you ever had a thought that "escapes" you; something that you can’t recall?

Have you ever said or heard someone else say, "Oh, it slips my mind, right now"? I know I’ve heard my mother use that expression a time or two before. And as you know, as we advance in years, it seems that more and more things seem to "escape us" when we try to call them to mind. This is what Hebrews, chapter two, verse one is talking about.

Therefore we must pay much closer attention to what we have heard, lest we drift away from it. Hebrews 2:1 (ESV)

The Greek word translated as 'drift' in English, is pararrhueo [par·ar·hroo·eh·o]. The AV translates it once as "let slip". According to Strong’s Concordance, it means "to glide by: lest we be carried by or pass by." Or "lest these things which we heard - that show us how to obtain salvation - slip away from us."

For since the message declared by angels proved to be reliable and every transgression or disobedience received a just retribution, how shall we escape if we neglect such a great salvation? Hebrews 2:2-3a (ESV)


The Greek word ameleo [am·el·eh·o] - translated as neglect in English - means "to be careless of." The AV translates it as "neglect" twice, to "make light of" once, as "regard not" once, and to "be negligent" once. Of those, I would say that many people today "make light of" this "great salvation," simply because they do not realize their need of salvation and/or how great the salvation being offered really is -- for it is a free gift from God, who is not only our Creator, but is also our spiritual Father.


This brings to mind a story I found on the Internet that asks the question, "Is the Packaging Important to You?"

A young man was getting ready to graduate from college. For many months he had admired a beautiful sports car in a dealer’s showroom, and knowing his father could well afford it, he told him that was all he wanted. As Graduation Day approached, the young man awaited signs that his father had purchased the car. Finally, on the morning of his graduation, his father called him into his private study. His father told him how proud he was to have such a fine son, and told him how much he loved him. He handed his son a beautifully wrapped gift box.


Curious, but somewhat disappointed, the young man opened the box and found a lovely, leather-bound Bible, with the young man’s name embossed in gold on the lower right-hand corner of the cover. Angrily, he raised his voice to his father and said, "With all your money you give me a Bible?" and stormed out of the house, leaving the Bible on his father’s desk.


Many years passed and the young man was very successful in business. He had a beautiful home and wonderful family, but realized his father was very old, and thought perhaps he should go to him. He had not seen his father since his graduation day. Before he could make arrangements, he received a telegram telling him his father had passed away, and had willed all of his possessions to him. He needed to come home immediately and take care of things.


When he arrived at his father’s house, sudden sadness and regret filled his heart. He began to search through his father’s important papers and saw the still new Bible, just as he had left it years ago.


With tears, he opened the Bible and began to turn the pages. He noticed that his father had carefully underlined a verse in Matthew, chapter seven; "And if you, being evil, know how to give good gifts to your children, how much more shall your Heavenly father which is in heaven, give to those who ask Him?"
As he read those words, a car key dropped from the back of the Bible. It had a tag with the dealer’s name, the same dealer who had the sports car he had desired. On the tag was the date of his graduation, and the words …PAID IN FULL.

How many times do we miss God’s blessings because they are not packaged as we expected? How many of us are going to miss out on the free gift of salvation which is our PAID IN FULL ticket to eternity in paradise with God, simply because the gift of salvation through faith in Christ was not the gift we were hoping for? How shall we escape such "a just retribution" if we neglect such a great salvation?

Then he went home, and the crowd gathered again, so that they could not even eat. And when his family heard it, they went out to seize him, for they were saying, "He is out of his mind." --Mark 3:20-21 (ESV)

On this section of scripture, J.R. Miller  comments:

They could account for His unconquerable zeal only by concluding that He was insane. We hear much of the same kind of talk in modern days when some devoted follower of Christ utterly forgets self in love for his Master. People say, "He must be insane!" They think every man is crazy whose religion kindles into any sort of unusual fervor, or who grows more earnest than the average Christian in work for the Master.


That is a good sort of insanity. It is a sad pity that it is so rare. If there were more of it there would not be so many unsaved souls dying under the very shadow of our churches; it would not be so hard to get missionaries and money to send the gospel to the dark continents; there would not be so many empty pews in our churches; so many long pauses in our prayer-meetings; so few to teach in our Sunday schools. It would be a glorious thing if all Christians were beside themselves as the Master was, or as Paul was. It is a far worse insanity which in this world never gives a thought to any other world; which, moving continually among lost men, never pities them, nor thinks of their lost condition, nor puts forth any effort to save them. It is easier to keep a cool head and a colder heart and to give ourselves no concern about perishing souls; but we are our brothers' keepers, and no malfeasance in duty can be worse than that which pays no heed to their eternal salvation.

How sad but true is this observation of the "common" Christian today. Negligence is the common denominator.

There really is nothing more I can say. You know the truth as well as I do, and the truth has been spoken plainly and more powerfully than I ever could.