What is Grace and Why Should I Care 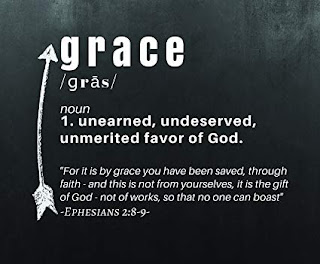 The Transforming Grace of God

"I am not one of those who treats the grace of God as meaningless. For if we could be saved by keeping the law, then there was no need for Christ to die."-- Galatians 2:21


Grace is a word filled with unique meaning, a word that expresses a complex set of understandings about our relationship with God. Grace views God's attitude toward us as one of love and acceptance. Grace is an admission that unaided; we are trapped by sin and incapable of winning God's favor. Grace is the triumphant announcement that God will come to the aid of all those who trust Him and give salvation as a free gift. Grace is a way of life, an attitude that rejects dependence on our own strengths or abilities and yet affirms that through Jesus we are able to live good and righteous lives. Grace is choosing to be and do good, relying on Christ for enablement.

GRACE, FAVOR, charis (khar-iss). This noun, which means 'favor' or 'grace', is used with reference to a voluntary act of 'goodwill' or that which one grants freely, even though there is no obligation to do so. In the New Testament (NT) charis is used mostly with respect to God's gracious intentions and deed toward humans - especially to his act of redemption through Christ (Galatians 1:6). Thus the meaning of the word is extended to refer to the 'state of grace' [being in God's favor] as experienced by believers in Christ (Romans 5:2). It can also be used to express 'thanks' or 'gratitude' to God (2 Corinthians 9:15). At the beginning and end of the epistles (letters, such as Paul's letter to the Romans), charis is used with the sense of divine 'grace' or 'favor' (Romans 1:7, Colossians 4:18). SOURCE: Strong's #5485