Our Need For God In Recovery 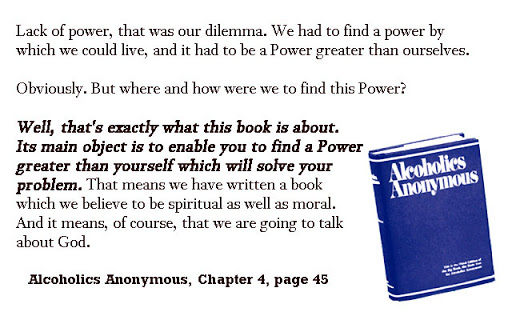 "Each group has but one primary purpose --
to carry its message to the alcoholic who still suffers."

AA's fifth tradition clearly states the primary purpose of AA as a whole. The message that AA carries, is that people suffering from alcoholism, can and do recover "from a seemingly hopeless state of mind and body." Such recovery is made possible by taking the twelve steps in their entirety and practicing the spiritual principles of said steps, in every aspect of one's life.

That said, let me ask you this... As a whole, what do you believe is the aim / goal / purpose of taking the steps, as suggested?

Or... to put it differently, do you believe that simple physical sobriety (continuous abstinence) is the sole aim / goal / purpose / original design of the suggested twelve steps?

If you believe that simple, physical sobriety is enough, then you are either unfamiliar with the content of the book, Alcoholics Anonymous, or you might be in denial as to your ability to control and enjoy your drinking.

In these early chapters we discover that spiritual principles could and would solve ALL of our problems (cf. bottom of page 42), AND that we are 100% hopeless apart from divine [superhuman / supernatural] help (page 43). From this we can clearly see that the suggested program of recovery (page 59) is NOT a self-help program. Rather it is a program centered upon the belief that...

The alcoholic at certain times has no effective mental defense against the first drink. Except in a few rare cases, neither he nor any other human being can provide such a defense. His defense must come from a Higher Power. (page 43)

We were in a position where life was becoming impossible, and if we had passed into the region from which there is no return through human aid, we had but two alternatives: One was to go on to the bitter end, blotting out the consciousness of our intolerable situation as best we could; and the other, to accept spiritual help. This we did because we honestly wanted to, and were willing to make the effort. (pages 25-26)

The co-founders and pioneers of what became known as Alcoholics Anonymous, made clear that the only thing that worked for them, was to let go of their old ideas absolutely (page 58). Thus, AA's suggested program of recovery is founded upon the spiritual principles they learned from members of the Oxford Group.

In the Forward to the First Edition of the book, Alcoholics Anonymous, the following declaration is made;

We, OF Alcoholics Anonymous, are more than one hundred men and women who have recovered from a seemingly hopeless state of mind and body. To show other alcoholics PRECISELY HOW WE HAVE RECOVERED is the main purpose of this book. For them, we hope these pages will prove so convincing that no further authentication will be necessary. We think this account of our experiences will help everyone to better understand the alcoholic. Many do not comprehend that the alcoholic is a very sick person. And besides, we are sure that our way of living has its advantages for all.

Thus, if we PRECISELY follow the pattern of those "one hundred men and women who have recovered from a seemingly hopeless state of mind and body," and approach our problem from the spiritual perspective instead from the self-centered perspective that has failed us completely, then we, too, can recover just like they did!

Our Need For God In Recovery - Part 2