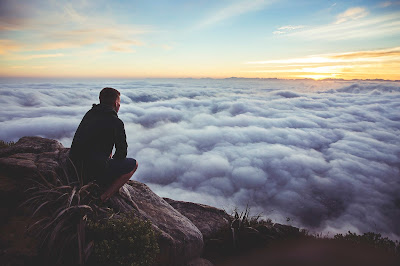 I originally wrote this article back in April 2013.

Lately, I have been reading up on New Age Spiritualism -


No overview of the 1970s in America can be complete without mentioning the New Age followers who turned away from the traditional religions to find individual truth.

According to Joanne Beckman of Duke University, “These seekers might be open to ‘trying church,’ but are just as willing to sample Eastern religions, New Age spiritualism, or the quasi-religious self-help groups of the Recovery Movement.

For seekers, spiritualism is a means of individual expression, self-discovery, inner healing, and personal growth. Religion is valued according to one’s subjective experience. Thus, seekers feel free to incorporate elements of different traditions according to their own liking. They shop around, compare, and select religious ‘truths’ and experiences with what one historian calls their ‘a la carte’ spirituality.” Some New Age followers focused their spiritual energies on angels, while others studied reincarnation, crystals, or chanting.


New Age Spiritualism is something that I see practiced and promoted by Alcoholics Anonymous. How did I arrive at that conclusion? By sitting in numerous meetings and listening to others and by reading the 'Big Book,' the '12 &12', and other various "conference approved" A.A. literature.
Some would say that early A.A. was founded upon Christian principles, and it was. HOWEVER, those Christian principles have been watered down to the point that only in the 'basic text' of the Big Book will you find any vestiges of the Christian principles that the 'pioneers' of A.A. practiced - back when they wanted to call it "The James Club."
Today, people in A.A. adamantly proclaim that A.A. is a spiritual program, not religious. I find this claim to be somewhat dubious because if one does not religiously go to meetings, get a sponsor, and work the steps, they are likely to "relapse."
People in A.A. hold Bill W in high regard and practically ascribe sainthood to him. But Bill was far from being a saint.
Dick B has written a book entitled "The Conversion of Bill W." In the description, Dick B says, "This book... is not about the nature of A.A. Nor about the place of the Creator in today’s program. Nor about whether AAs are a chosen bunch. It’s an account of the many ways the Creator seems to have touched the life of Bill W. and, through him, the Fellowship of Alcoholics Anonymous. Did He [GOD] impact Bill W.’s life and hence A.A. itself?"
If we look at A.A. from such a perspective, we must put blinders on; to better ignore the WHOLE TRUTH about Bill W. and all the “spiritual influences,” he readily adapted.
Now I know that many people do not consider Wikipedia as a reliable reference source, and in some cases, this may be true. But if you go there and look up BILL W, you will find reliable, factual (i.e., documented) information regarding Bill W and the various "spiritual influences" that Bill adhered to and practiced in his lifetime. You will also learn that Bill W's conduct caused many embarrassing problems for A.A. as a whole. For example, Bill W was an addict. He was a sex addict as well as a nicotine addict.
Additionally, he experimented with LSD (under medical supervision, of course - like that makes it OK). He held séances and used an Ouija board regularly! He suffered from severe bouts of depression in sobriety. On his deathbed, he begged for a last-shot of whiskey.
Does this sound like a man who believed in God and the finished work of Christ Jesus? "We think not!" Yet if you dare to bring up the truth about Bill W in an A.A. meeting, you best be prepared to be condemned for heresy and 86'd from the meeting, because according to most people in A.A., Bill W was chosen by God. But just like King David, his son Solomon, and other highly venerated people chosen by God, Bill W may have been running strong early in the race, but he didn't finish well.
People say that the Christian church is filled with hypocrites, and that is why they don't go to church. I am finding the exact same principle as being valid for A.A. as well - it is riddled with hypocrites. The very program itself is hypocritical. A.A. literature says you can believe in any god you desire or no god at all! If one is not required to believe in any god what-so-ever, then why do the Steps and the Big Book say that we must put our faith in a Higher Power? Why does it repeatedly state that "God has done for us what we could not do for ourselves"?
There are those who claim that the Bible contradicts itself. From what I can see, the A.A. "bible" is just as contradictory!
Please pray for me as I seek to renew and restore the biblical principles of recovery as practiced by the one hundred men and women mentioned in the Forward to the First Edition of the book, Alcoholics Anonymous.

Thank you, and God bless.