Eight Thousand Four Hundred and One 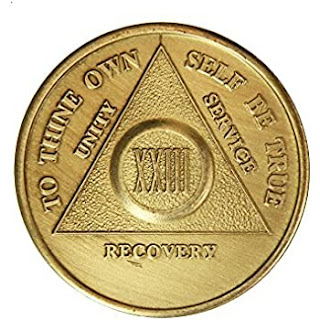 On July 10, 1999, I called a man I had spoken with after an AA meeting. I told him I needed help. He said he was willing to sponsor (help) me and take me through the "suggested" 12-Step program of recovery. On July 12, 1999, he began to take me through the Basic Text (chapters 1-11 of the book. Alcoholics Anonymous) and pass along his experience and wisdom to me.

"It's not the years, it's the mileage"

To me, that adage is relative to my time in the program of AA. For it is not the number of days sober that mean the most. Rather, it is the quality of one's recovery that is of greatest importance. And if one knows and understands the original program of recovery [that is precisely laid out in the eleven chapters of the book, Alcoholics Anonymous], then you know and understand why I make such a claim.
The quality of my sobriety is proportionate to my awareness of "the new God-consciousness within."  (Alcoholics Anonymous, Chapter 1, Bill's Story, Page 13) By striving to seek and maintain my "conscious contact with God", my will becomes more aligned with God's will for me. (see Step 11) 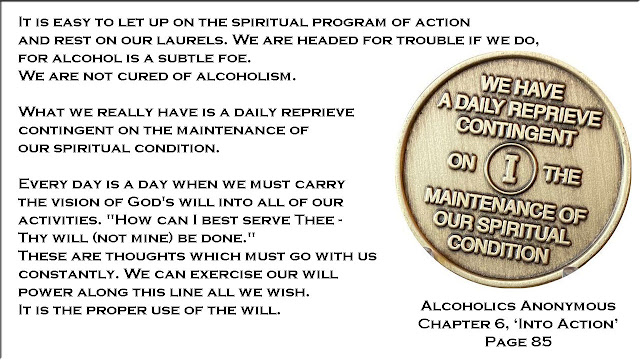 The more aligned my will is with God's will, the more the ninth step-promises on pages 84 & 85 become a reality for me.
I realize that in this day and age, many people have no desire to align their heart and their life with God's will for them. I used to feel that way too. But that was prior to my "coming to the end of myself" (hitting bottom). But because of what I had been hearing "in the rooms" of the Fellowship, I found myself on my knees the morning after my last drunk. With the story of the Prodigal Son in mind, I asked God, "If it's not too late for me, would you help me turn my life around?"
Because of my past and some things I had said to God in anger, I wasn't holding my breath. I really had little-to-no hope of moving forward with God. But a few moments after making my plea, He put it on my heart to call the man who had given me his card. The man whose card declared that he was a Pastor.
That was the first time God revealed his desire for me. Many times since, He has opened my eyes and my heart, to His agape love for everyone who calls on him. Over time, I began to look back and see where He had covered (protected and helped) me -- even when I wanted nothing to do with Him.
In one way or another, many people have a strong resentment toward the God of the Bible. It is the one resentment that never seems to be included when doing a 4th-step inventory. As a result, many people continue to be their own Higher Power, striving to maintain control over people, places, and circumstances in their life. They can never seem to "comprehend the word serenity and …know peace." (ibid. Chapter 6, "Into Action" pgs. 83,84)

Chapter Five : HOW IT WORKS
Rarely have we seen a person fail who has thoroughly followed our path. Those who do not recover are people who cannot or will not completely give themselves to this simple program, usually men and women who are constitutionally incapable of being honest with themselves. There are such unfortunates. They are not at fault; they seem to have been born that way. They are naturally incapable of grasping and developing a manner of living which demands rigorous honesty. Their chances are less than average. There are those, too, who suffer from grave emotional and mental disorders, but many of them do recover if they have the capacity to be honest.
Our stories disclose in a general way what we used to be like, what happened, and what we are like now. If you have decided you want what we have and are willing to go to any length to get it-then you are ready to take certain steps.
At some of these we balked. We thought we could find an easier, softer way. But we could not. With all the earnestness at our command, we beg of you to be fearless and thorough from the very start. Some of us have tried to hold on to our old ideas and the result was nil until we let go absolutely.
Remember that we deal with alcohol-cunning, baffling, powerful! Without help it is too much for us. But there is One who has all power-that One is God. May you find Him now!
Half measures availed us nothing. We stood at the turning point. We asked His protection and care with complete abandon.

Very often, those who refuse to "let go and let God" direct their path, end up "going back out" and dying from the disease of self-centered willfulness. They die trying to eradicate (drown out) the truth from their consciousness. They fear God for all the wrong reasons.

If you offer a person dying of thirst a glass of water, they will take it.
But if you tell them that God sent you, they will refuse it out of spite.